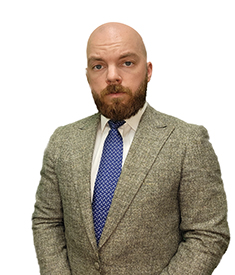 Coming from a family of attorneys, Vickers L. Cunningham Jr. was destined to follow a similar path. Vickers pursued a career in civil litigation and became an associate at Chad T. Wilson Law Firm in 2022. Prior to joining the firm, Vickers litigated personal injury cases, primarily 18-wheeler accidents and premise liabilities at critically acclaimed law firms in the Houston area gaining valuable insight on how to retain the highest recovery for his clients.

Before attending law school, Vickers spent a few years in Nashville, Tennessee, as a contracted songwriter for various record labels. His music appeared on various artist catalogs, some gaining national recognition. Although he traded in his guitar for a suit and tie, Vickers still writes and performs his songs at local honky tonks and dive bars throughout the Houston area.