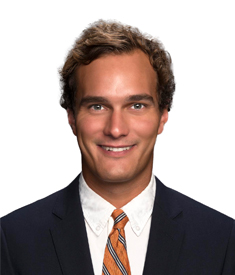 Hunter is the Louisiana attorney for the firm.  As a Baton Rouge native, Hunter attended Louisiana State University where he received a B.S. in Biology. Following his undergraduate education, Hunter moved to Jackson, MS where he obtained a Master’s of Medical Science from Mississippi College.  Hunter then began LSU Law School where he earned the John P. Laborde Scholarship and graduated with a Juris Doctorate and Diploma in Comparative Law.

While in law school, Hunter clerked for several entities including a federal administrative agency, a solo practice attorney, a state trade association, a U.S. Congressman, and two large law firms. After passing the Louisiana Bar Exam, Hunter worked at the Louisiana State Senate and then a national trade association in Washington, D.C.  For the past three years, Hunter has practiced various areas of Louisiana civil law in Baton Rouge.  Hunter’s favorite part of the job is helping his clients get what they deserve so that they can move on with their lives.

When Hunter is not practicing law, you can find him on the tennis court or sailing with family and friends.